CCOC hosted the launch of the City of Ottawa’s new recycling bag initiative at our 464 Metcalfe property on September 2, 2015.

We’ve been using our own recycling bags since 2008, with great feedback and results from tenants. In fact, our Beaver Barracks properties have some of the highest waste diversion rates in the city of Ottawa! These bags allow tenants to quickly and easily bring their recyclables down to a communal garbage room and properly dispose of them.

These recycling bags are one of CCOC’s many green initiatives.

We wanted to make sure everyone had a chance to hear this great story:

“My husband Peter and I have been recycling and composting for about thirty years. In the early years, living in an apartment building, we had to put it all in the car and drive it to a rather inconvenient place. It is really difficult to sustain any habit, if there are too many obstacles.

We brought the kids up in a house where we did our own composting and participated rather enthusiastically when recycling and green binning started. How easy it was to finish off a tub of yogourt, swish it out and toss it in the blue box.

Five years ago, our teenagers had typical teenager angst over the state of the world. We talked about how complaining about an issue doesn’t solve it; were we prepared, as a family, to take on the project of reducing the family carbon footprint? Everyone agreed.

We documented our journey in a blog called Family Transition to Resilience and Living Lightly and became involved with Transition Ottawa initiatives. 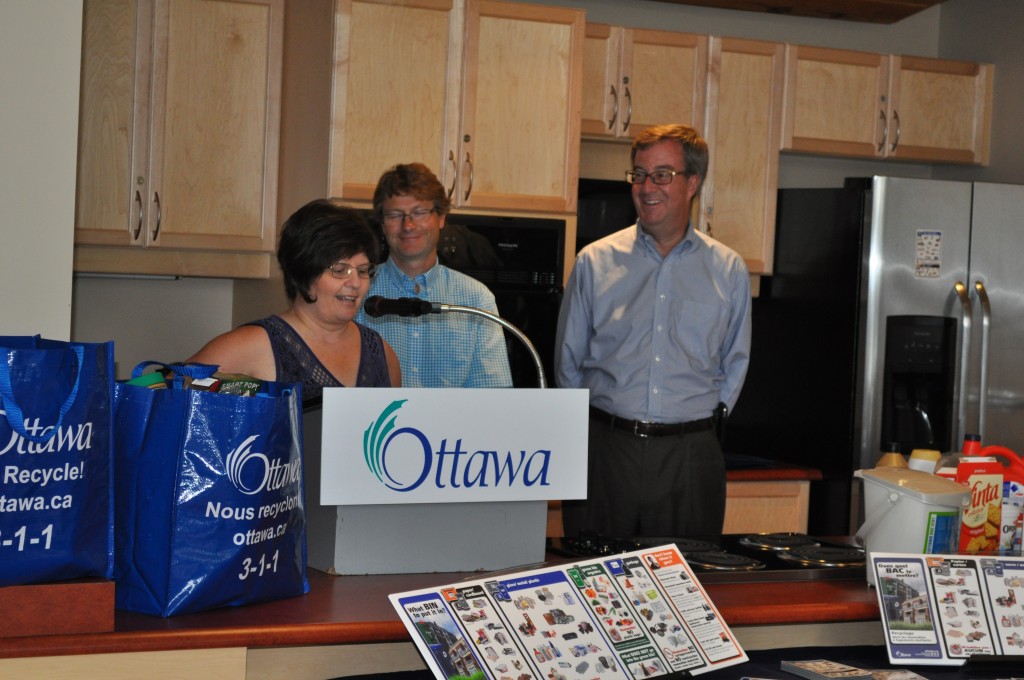 The first, easy project was garbage. We actually had weeks where there was nothing going to landfill! We did it by not buying anything that couldn’t be recycled or rotted. Did it happen every week? No, but we learned that it is possible.

We moved here, to Beaver Barracks, in large part because it was going to make living sustainably in the city a lot easier. When we got the keys and moved in, there on the kitchen counter was a welcome package. There was lots of information, a bag to collect the recycling, and a compost bin. The bag was just like the one the city will be providing to residents of apartment buildings.

The bag sits under the kitchen sink and is easier to carry down to the garbage room than a blue box would ever be. What a long way we have come in thirty years. What was horribly inconvenient is now simple and accessible.

A couple of weeks ago, I went down to the garbage room and felt a moment of panic. The green bins were all full and so was the paper bin. And then, I smiled and did a happy dance in the garbage room: recycling is becoming as normal a part of life as sweeping the floor.”

CBC News coverage of the event.

Pamela also led the mayor on a tour of the 464 Metcalfe rooftop garden and the Beaver Barracks courtyard. We were proud to show off the beautiful gardens CCOC tenants pour so much love and time into.