It is with great pleasure and pride that we share the news with you that our own Debbie Barton, Manager of CCOC’s Rental Department, was recognized with the 2016 Sybil Frenette Outstanding Leadership Award by the Ontario Non-profit Housing Association (ONPHA) on November 5th at ONPHA’s annual gala before an audience of over 400 housing staff, volunteers and tenants from across the province.

This award is the Oscar of the Ontario housing sector – the pinnacle of recognition given only to select individuals whose energy and vision have shaped the non-profit housing sector (and I have to point out that over 1/3 of all winners in the history of the award have been from Ottawa). It recognizes Debbie’s long-term and tireless commitment to non-profit rental housing and the affordable housing community at a local, national, and international level for more than 30 years.

Kerry Beckett, a 20-year CCOC tenant, Board member and Chair of the Rental Committee says it best:

“I have had the pleasure of knowing and working with Debbie Barton for more than 20 years. Right from the first day I became a CCOC tenant and later when I joined and chaired the Rental Committee I was impressed with Debbie’s knowledge of all things housing. As the Manager of the Rental Department she is the person the Rental Committee depends on to inform and then interpret the ever changing policies and programs of not only the City of Ottawa housing department, the Ontario government and the Federal Government. Without her walking us through the “housing maze” we would be ten people drinking herbal tea and staring at each other and trying to make sense of it all.

Debbie inspires and leads her staff by example, always the consummate professional and showing the highest level of integrity. All amazing qualities but not what our tenants would say makes Debbie their “go to” person.

She knows most of our tenants by name, she knows their stories and she is always on their side. There is never a time when she is too busy to see them and try to help. Debbie and her staff take great pride in handling some of the most challenging situations every day keeping the best interests of CCOC in mind while never forgetting that they are sometimes dealing with the most vulnerable people.

Because of her commitment, her knowledge and experience in the housing field she is deserving of our gratitude and acknowledgement, but because of her heart she deserves this lifetime award because she has literally given a lifetime to it. Congratulations Debbie!” 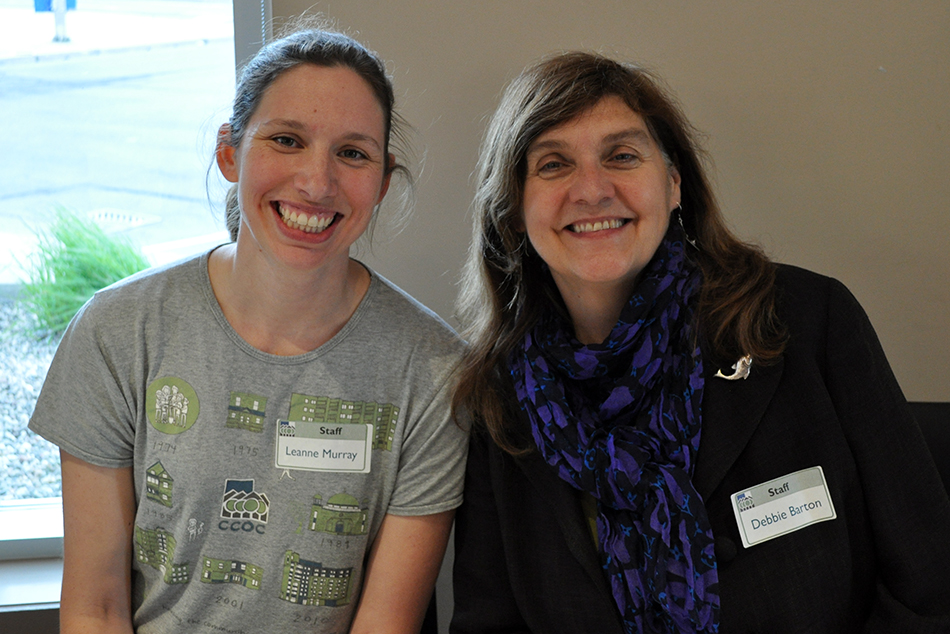 It was Debbie’s work at The Elizabeth Fry Society of Ottawa in 1983 that bought her to the housing field. While there, she conducted research on the housing needs of women in Ottawa.  This work formed the basis of her Master’s thesis in Social Policy & Administration at Carleton’s Social Work Department. Debbie continued in the sector in a variety of roles from front-line emergency shelter work at St. Bridget’s Church to housing research for the Social Planning Council. Debbie was hired following previous contract work in 1989 as Rental Co-ordinator for Centretown Citizens Ottawa Corporation (CCOC), an organization that has grown with Debbie’s input into a well-respected and innovative non-profit housing provider. CCOC grew in the late 1980s to 743 homes and 32 properties. By 1993 CCOC had grown to 41 properties and 1199 homes – an achievement for which Debbie played a crucial role with her professionalism and expertise in managing rental housing. Debbie’s department has continued to grow over these years along with CCOC and she now supervises five full time staff as well as over 20 part-time tenant custodians, together managing almost 1600 tenancies for 2500 people.

At CCOC Debbie provides leadership, expertise, and support to the Rental Committee, which is made up of tenants and community members and gives advice to the Board on issues that affect tenancies (rents, parking allocation, new development programs, vacancy rates, subsidy programs).

Managing a mixed portfolio of 57% subsidized and 43% market rent homes, including 10% of tenants supported through agency partnerships  means having a well-rounded skill set to deal with many types of tenants of all ages, backgrounds and abilities. Debbie pioneered CCOC’s “supported housing” arrangement with nine community partner agencies to ensure CCOC can house people who would otherwise not be able to live independently.

Debbie exemplifies everything that a great leader should be and she consistently demonstrates her real commitment to community based housing, not just at CCOC, but across the entire housing community in Ottawa, and beyond. Debbie was a significant influence in the development of The Social Housing Registry in Ottawa. Long before a centralized waiting list system was mandated by the province, some housing providers came together in Ottawa to plan for a centralized wait list in our community. Debbie took the lead for CCOC, and recognized that moving to a new system, and transforming the current practice of providers, would take much work and vision. She jumped in with both feet! Taking a lead on the choice of a technology platform and what would be required, looking at staffing requirements and models for not only the pilot but beyond, and meeting with providers to sell the idea of this change were all part of her contribution. Indeed, Debbie supervised the pilot project staff, and sat on the hiring committee for The Registry’s Executive Director once the pilot had incorporated to a non-profit organization. Debbie continued to serve on the Board of The Registry, guiding the development of policies and procedures.

Debbie also served as the founding Chairperson of the Ottawa Social Housing Network (OSHN) from 1998 -2006 and continues her active involvement. OSHN is an active and vibrant network made up of social housing providers and advocacy agencies that work with tenants and applicants in Ottawa. OSHN responds to requests for information about social and affordable housing, discusses best practices, and provides support both to providers and the City in its role as Service Manager about the impact of local policies etc.

Debbie has provided sector leadership as an active member of the Housing Stakeholders Advisory Group established by the City of Ottawa for sector collaboration and participation on a range of issues, including local rules and policies. She has been an incredible advocate to ensure that housing providers maintain their independence while complying with the rules set out by legislation. She has worked tirelessly to ensure that our sector is strong, vibrant and that our voice is heard.

Debbie acts in a mentorship role to smaller housing providers in the city, always making the time to answer questions, and is quick to share knowledge, policies, and procedures that will be of assistance to them.

Debbie was a member of the ONPHA Board from 2007-2010, including as Vice-President in 2009-10. She was also an ONPHA Local Network Liaison for several years.

In her spare time

In her “spare time”, Debbie is now Chair of the Board of Directors at The Door Youth Centre, a local drop in for young people in her neighbourhood. She has been dedicated to this task, raising funds for The Door at private events and as part of the Board’s fundraising activities. Malik Ayass, Executive Director of The Door, says:

“Debbie has been the most dedicated volunteer The Door has seen in its 23 years of operation. She has been our Vice-President for several years and on the Board for almost ten years. Debbie is committed to our cause, the community, and the young people who use our services. Debbie goes above and beyond to ensure we have enough funding. She cares not only about our work but also the young people who use The Door. She understands the needs of the community and has been a great support to me as Executive Director. I am very happy to endorse Debbie’s nomination for the 2016 ONPHA Sybil Frenette Award for Outstanding Leadership.”

In 2015 Debbie spent two months in South Africa, visiting social housing organizations through a Rooftops exchange as well as seeing the Big Five and hiking in the Drakensberg Mountains. Further world travel has taken her to Sweden, Morocco, Chile, Easter Island, Cuba, Costa Rica, England, Spain, and most of Canada, including Nunavut. She and three stalwart friends have been attending the New Orleans Jazz Festival since 1995. Manhattan, Los Angeles, Phoenix, Taos, Chicago, and San Diego have also been some of Debbie’s favourite US cities. And Debbie demonstrated amazing endurance by walking the complete length of the Camino in 2013 from Saint Jean Pied de Port, France ending at the Cathedral of Santiago de Compostela Galicia, Spain some 800 kms in just over a month.

ONPHA’s Outstanding Leadership Award is given out annually to an individual whose energy, vision and leadership have furthered the cause of non-profit housing, served the needs of low-income people and created a lasting legacy benefiting both tenants and the community.

Created in 1996, one award is given out each year to celebrate an individual whose energy, vision and leadership have furthered the cause of non-profit housing. Previous local Ottawa-area recipients are: Derek Ballantyne, Catherine Boucher, Ishbel Solvason-Wiebe, Lynn Carson, Laurene Wagner and Lorraine Bentley.